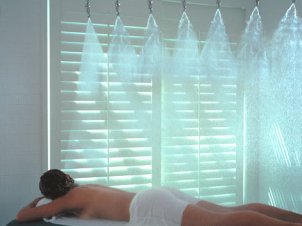 The Vichy shower is a kind of shower where large quantities of warm water are poured onto the body while the person lies on a cushioned wet table, similar to a massage table, but with drainage for the water. The experience of a Vichy shower is like a relaxing massage under sprinklers, which has a therapeutic and healing effect on the body.

The water pressure applied to the body during a Vichy shower is believed to be extremely beneficial as it encourages relaxation and releases toxins from the body. The gentle massage on the body by the falling water increases circulation and encourages a healthy lymphatic flow. The benefits of the water pressure are believed to assist in the relaxation and stimulation of the mind and body. The water poured should be warm enough to suit body temperature.

A Vichy shower can be taken alone or along with another body treatment, such as a massage, salt scrub or body wrap to encourage even greater health benefits.