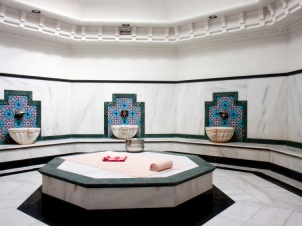 The Turkish Baths or Hammam is the Turkish version of a steam bath with the emphasis of the therapy on water rather than steam. The concept originated in Arabia but was popularised in Turkey by being made accessible to people of all statuses.

In Turkey, Hammams were social centers; even those who could afford to have them in their own homes would visit public ones for business and social reasons. The idea of Hammams being a place of cleansing links into many religions where cleansing and purification are an integral part of worship.

Turkish Baths first appeared in Ireland in 1856 near Blarney in County Cork. Many of the original buildings are still standing but aren’t in use. Nowadays variations of these traditional Turkish Baths are offered in luxury spas and hotels. Traditionally men and women were divided for the treatment but some contemporary Hammams cater to couples.

The Hammam ritual has a number of steps:

Preparation: During the first phase of the treatment you enter the Camekan or entrance room where you can change your clothes and have something to drink before entering the bath.

Adjusting: The staff member will then bring you to a transition area known as the Iliklik, where you are given time to adjust to the heat.

Full-Body Scrub and Soaping: At this stage you enter the hot room known as the Hararet which houses the large marble belly or stone. Bathers are arranged around the fountain on marble slabs and are vigorously scrubbed by the attendant. After this, special soap is applied and you may be offered shampoo.

Massage and Rinse: A massage is delivered while you are covered in soap. After the soapy massage warm water is used to rinse away soap. The treatment itself has a set time but afterwards you are generally free to relax in cooling off areas for as long as you like. Some Hammans are followed by a massage, facial, or reflexology.

If you are interested in these treatments, here are the Spas in Ireland with Hammams and Turkish Baths.

Treat someone you love to a Spas.ie gift voucher so they can experience a Turkish bath for themselves.