Do you have ‘Smartphone Face’? 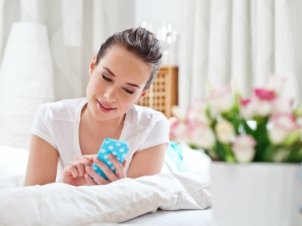 Just in case you needed another cause of ageing to worry about – cosmetic surgeons are now blaming the use of smartphones and other personal devices for the increased demand for certain age-reversing cosmetic procedures.

Unlike the traditional PCs, which are generally positioned at eye level, new digital gadgets usually encourage a downward tilt to the head. Small enough to be held in the hand, we tend to position them comfortably in the lap rather than hold them up in front of our faces.

The result is increased use of neck and jaw muscles and more creasing and wrinkling of the skin as we retract the chin in towards the neck. What’s more, reading from smaller screens can encourage squinting and the deepened crow’s feet lines that come with it.

The term ‘Smartphone Face’ was coined by a British surgeon who uses it to describe the sagging jowls, double chins and general lines around the jaw and neck that he associates with smartphone use.

The surgeon in question, Dr. Mervyn, explained to a London newspaper: “If you sit for hours with your head bent slightly forward, staring at your iPhone or laptop screen, you may shorten the neck muscles and increase the gravitational pull on the jowl area, leading to a drooping of the jaw line.”

As a result, he claims he has seen a significant increase in procedures such as ‘chinplants’ and other jaw-related enhancements in recent years. This has been reinforced by a report by the American Society of Plastic Surgeons which revealed that chinplants are the fastest growing cosmetic surgery trend in the U.S.

Yet to be Proven

Another explanation offered for the trend however, is that people are simply noticing sagging jaws more as they see more photos of themselves on social media. Likewise, the act of video chatting on a lowered device can give the impression of a less defined jaw line in your on-screen reflection than you have at a normal elevation in real life.

Of course this ageing process can also be attributed to genetics and other lifestyle factors such as dramatic weight loss. “People who jog and diet lose volume from their faces and their skin can become saggy and loose, especially around the chin area,” according to Dr. Nick Lowe.

What to Do if you Have been Affected

Aside from the increase in chinplants, the trend has given rise to a whole new host of non-surgical procedures as well. ‘Chintervention’ treatments, as they have been dubbed, include the Chinjection (the injection of a filler to counteract loss of volume) and the Nefertiti Lift (the use of Botox to mobilise neck muscles and reduce the downward pull they create on the jaw line).

Of course prevention is better than cure – and in this case, it’s just as true for your posture as your skin. The best treatment is to avoid prolonged periods of time slumped over electronic devices, particularly if you’re spending that time examining your jaw line in pictures!