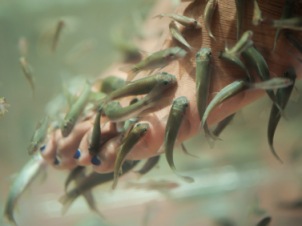 Having initially been greeted with disbelief in Ireland, it looks like Garra Rufa Fish Pedicures are here to stay. The ticklish treatments, designed to remove dead skin cells from the feet using tiny toothless carp, are now popping up everywhere from the local spa to the local shopping centre.

But concerns are now being raised over how sanitary the fish pedicures are, with health and safety experts suggesting the fish could be passing infections between customers. Other groups, including animal rights activists, have labelled the pedicures cruel and unnecessary, with a small percentage of each batch of fish dying when introduced to a new spa.

Various states in America have completely banned the treatment over fears that any open wounds, cuts or nicks in the feet could provide an open pathway for bacteria from the fish tanks to enter the bloodstream. It has yet to be conclusively determined whether the fish themselves can transfer fungal or other infections from one person to the next.

Other arguments state that the repeated use of fish on multiple customers is in breach of basic spa regulations. Before and after all spa treatments, any implements used on a customer must either be discarded or thoroughly sanitised (towels, sheets, tweezers, wax applicators etc.) to maintain health and safety at the spa. Understandably, this isn’t feasible when dealing with live creatures.

Spa owners have widely dismissed claims that the pedicures could cause infection, saying that the filtering and UV lighting used in the tanks eliminates any risk. There are no legal regulations for the practice in Ireland as of yet, but the standard procedure in spas is to ask customers if they are suffering from any infections or have any open cuts prior to undergoing treatment.